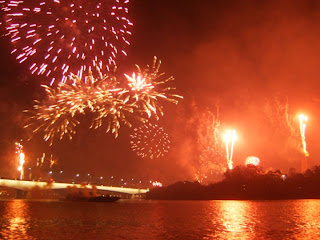 Mom, this one is for you. Last night we went to RiverFire 2010 here in Brisbane along with 600,000 people. They had fireworks everywhere all synced to music! It is a month long festival and last night was the opening night. They had the best fireworks show I have ever seen in my life! These Aussie's sure know how to put on a good fireworks show (even though personal fireworks are illegal) it was even better than New Years Eve in Sydney with the Harbour Bridge! We had the PERFECT spot too! Ben and I were right on the river and we had no one in front of us and no trees or anything blocking our view. They shot fireworks from 2 bridges and 3 barges all over the river. Also, they shot them off buildings right in the city centre CBD. It was so amazing! they whole sky was lit up! Along with that they had jets and helicopters flying over too.

America back in the 1960's designed a fighter jet called the F111. The US doesn't use it anymore but, Australia still has some that they have continually updated. So for this riverfire they fly the jets RIGHT over our heads! They turn on the afterburners and dump fuel directly into the engine creating a HUGE flame! It was SO loud and SO fast... It was awesome! It was over it just a few seconds but, it came back three times. I loved watching that jet! It was so fast that it broke the sound barrier! I heard the sound and I literally thought there was a second jet but it was just the sound from the first jet flying by! We actually witnessed history because this is supposed to be the last year the F111's are doing the "dump and burn" fly by as they are being retired. Australia is the last country in the world to use them still so it was neat to see them as they are being retired.

The Australian military was also there recruiting and they brought out their weapons and vehicles for us to play with that was really cool. They had one of their attack helicopters do a fly by which was neat. All of this was free and it lasts all month!

After we finished watching the fireworks we went into the city and had dinner at a really good interesting Italian place called Vapiano's. Ben had raved about this place so I wanted to try it. Basically they give you something that looks like a credit card and then you go up and order your food. They make it right in front of you in the kitchen and you can say I want more of this, less of this etc. Then you go sit down with a buzzer and when its ready you go pick it up. It is all like self service. It was expensive but good! So all in all a good night had by all :)

The only downside to our whole day was when we got to the fireworks like 5 hours early! we were looking for a spot to watch them and we saw some ladies in a spot so we wanted to get near to their spot. Now keep in mind we weren't "taking" their spot in any way, just close to it. But boy did they bite our heads off! it was just the two of them but they SCREAMED at us. We have been here since 1pm and this WHOLE area is ours! (its not legal to "reserve" spaces there) but they were just jerks and it wasn't even worth fighting with them so we left and then we found our even BETTER spot. So I just laughed to myself. On the way home our train was packed with literally like 50 or 60 people wall to wall and thank god we had a spot to sit down because a girl ended up throwing up in our train carriage and it was really gross. It got all over some people and all over the floor and we were stuck with it :( Apparently she drank too much. Thank God it wasn't on us though! But, other than that everything was fine : )

Talk at yall later and enjoy your weekend wherever you are,Tyler

P.S. Check out my facebook page for more great pictures. I should give credit where credit is due and let you know these are Ben's pictures/videos.
Posted by Unknown at Sunday, September 05, 2010