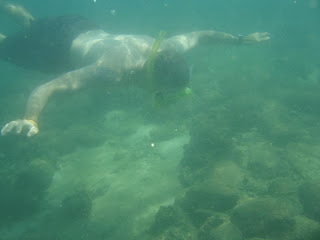 I  just came back from an awesome weekend snorkeling trip and I wanted to wait to write this until I got the underwater photo's from a German lady on our tour. She promised to send me her underwater pictures but she hasn't yet and I am tired of waiting haha. So here goes! This past weekend I went with my friend Maurice and another expat guy to a small island about 30 or 45 minutes from where we live to go snorkeling. We had the perfect day for it, the water was crystal clear and the weather perfect!

You know I did want to mention one other thing about driving that I noticed. There is one stop light in my town at our one major intersection. It is a "T" junction. Well NO ONE follows the light. People go when they want, stop when they want lol. So, you always have to watch out when you are making a turn of any kind at this light. The concept of a turn lane does not exist here where I live so rather than being able to make a semi safe protected turn you have to make sure there is no oncoming traffic before you turn AND you have to make sure there is no traffic behind you when you turn so you don't get hit. It isn't super dangerous since I live in a small town and I have never had any accidents but it is frustrating sometimes. You always just yield to the larger vehicle haha. I would imagine even if they did have a turn lane allowing vehicles to continue going straight while others waited to turn no one would obey it anyway considering they use the shoulder as a functional driving lane! :P

Before he left though we watched an American movie, "The Mechanic" With Jason Statham. It was a remake of a 1972 movie of the same name. It was pretty good, action packed as his movies usually are haha. At the end of the movie he is driving away and he is driving on the right side of the road (the American/Canadian side) and I immediately thought in my brain wait, he is on the wrong side! It is so funny that since I have been driving here in Thailand my brain has so adjusted to left hand driving that even on a TV screen the American style of driving looks weird to me! I had to laugh at this fact but it is true. Even when I lived in Australia and New Zealand for well over a year I got used to left hand driving but not to this extent because there I didn't have to do it everyday like I do here.


We paid 11 USD for a half day tour with lunch and snorkel gear included so it was not a bad deal at all! We had a great time and I saw some amazing stuff. If I can get her pictures I will post them for sure. We got to feed the fish and they swarmed up EVERYWHERE once you threw the food in the water. You could hardly see! There was no much coral to speak of, most of it was dead. But, the fish was amazing colours and really beautiful. There was also giant clams you could pick up from the sea bed. We got to catch some live fresh squid and I got to see "cuddlefish" these were big brown fish that just floated on the bottom and you could literally get inches from their faces and they wouldn't move! That was the coolest part of the whole trip for me.

The day before our snorkeling trip Noong cooked a seafood feast for us with fresh (right out of the ocean) live (for a while anyway haha) crabs and squid. It was so good! That night we had a party for a German friend of ours and Noong prepared yet another amazing meal with lots and lots of meat plus a chocolate cake with rum mixed in. It was SO good! I am so lucky to be so well fed all the time haha.
Maurice had to leave here to go further down south to Koh Phangan to visit his friends so this is the last I will see of him for a bit. We had a good time together though hanging out and going snorkeling and to some other beach towns around here they were much different from where I live but still neat, a little more touristy though. We even got to see Thailand's largest sand dune (it isn't that large lol) It was nice to hang out with my friend for a while. Living in a small town can get isolating sometimes!

It was just Chinese New Year here. Yes, this is Thailand but they have the Buddhist calender (543 years difference) and they celebrate Chinese New Year. There was many many celebrations because it is now the Year of the Dragon and considered very lucky by many people! Many many women want to get pregnant and have babies this year! I also had the closest thing to a "pig in a blanket" that they have here. It was a doughy pastry with meat in the middle and it was so good! Well that is all I have for you now. I am back to work and back to the usual. As soon as I get those underwater pictures (if I get them) I will post them. Yall take care,Tyler
Posted by Unknown at Tuesday, January 24, 2012