The two dollar circus of death

July 20th was Colombian Independence Day so in honor of this I was invited to go on a trip with one of my clients since it was a public holiday. It was a small town about four hours away from Bogota. Due to the traffic on the holiday weekend my client wanted to leave at 5am! It was really early but we beat most of the traffic. My client is married and has two sons. His family is really nice and they all speak pretty good English, I work with him every morning on his English and his kids English is pretty good.

Well we got there and the first thing he showed me was the hostel he is building. It will be an eight room hostel with cable tv and air conditioning. He is about one month away from completion! He is also constructing a restaurant to go along with the hostel and he is hoping to buy some more land to build a recreational fish pond and fish related restaurant so he has many plans in the works! 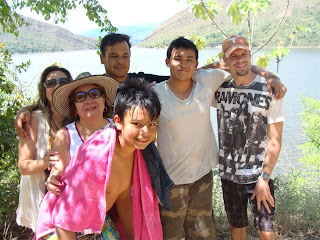 He bought a 1964 Jeep, just something to drive around town in and nothing special. None of the gauges or seat belts even worked but, I was chauffeured around by his 13 year old son William. All things considered, he was actually a decent driver considering what he had to work with haha. He also took me for a ride on his motorcycle. He brother Diego was 16, almost 17. After they gave me the tour of the town I relaxed at the hostel and met all their extended family. Family in Colombia is totally different than back home. Colombians live with their parents basically until they get married or until their mid 30's. Family is a daily thing. You see ALL your extended family all the time, not just on holidays.

Now I guess I should tell you about this circus of death haha. So there was a little carnival/festival in town and since this is such a small town I am sure this is more excitement than the people had seen in a long long time. They just don't have the population to bring the big acts into town. At this circus (it was based out of Peru) of course they spoke only Spanish, and they had a strange accent and spoke really fast so I didn't understand much. We were sitting front row so I was terrified they were going to pick on "El Gringo" aka me. Thank God they didn't!

Once the acts started, there was no need for language so that was good for me. The ticket to the circus cost only two dollars but they didn't things that would be so   illegal in America. They had ZERO safety gear. For example, they had a guy come out with his two little girls, he claimed one of them was two years old and the other one looked to be about five or six. He then proceeded to put them on a ladder (they climbed to the top) and he balanced it on his face! It was so dangerous and if those girls would have fallen off, the little girl would most likely have been severely injured if not killed. I was not a fan of them exploiting little children just for more crowd appeal. But, the crowd did love it! 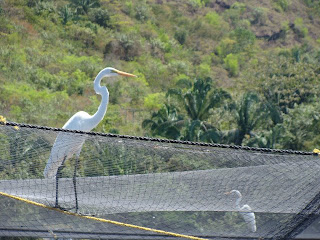 We also went on a tour of Lake Prado which was beautiful lake close to our little town. It was so nice and relaxing and that day the weather was beautiful (a great change compared to Bogota!) I went there with Diego and his family, including the mother in laws. They fussed over me like hens... So worried I would drown they forced me to wear a life jacket even in water I could stand up in! haha. It was nice to know that people cared though. I got a lot of good food and good times. I certainly can't complain. Our drive home took forever due to the terrible traffic but I had a really great time and Diego and his family were super nice to me, showing me around and letting me experience new things and new foods and drinks.

On a little side note, things are going great for me and my new girlfriend Viviana. I couldn't be happier! But we are taking this one day at a time and we will see how this all goes. Wish me luck. I have had a lot of ups and downs with my relationships but maybe this one will stick. It is different for both of us because she has a child and speaks no English! But, honestly neither of those things has been a huge problem for me. I am learning Spanish quickly now!! I will keep you updated :) 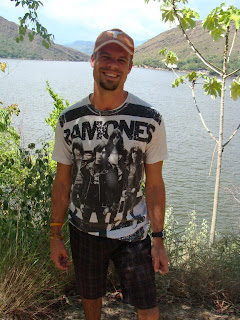