Today Noong and I and a group of friends went from our little town to the Thai/Burmese Border. Surprisingly it was only just over 10 kilometers away. For you American readers, that isn't that far lol. So there was a total of six of us and we hopped on our motorbikes and left at 10:30am. Off we went for our adventure! I was the youngest one of the group but I don't mind, most of my friends here are older but all very good people with a lot of experiences to share. 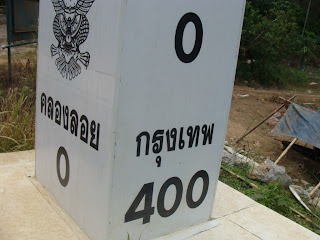 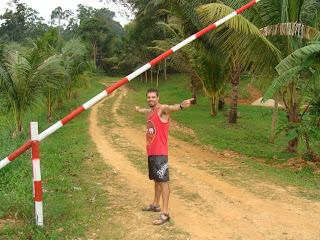 So we drive and drive on the highway then the road ends and we hit a dirt road. We start to drive more and get into the hills and mountains. Much different than our little beach town. I start to realise that the people up in this area don't see many farang (white people) because I was certainly getting a lot of attention. We get to a sign and the border between Thailand and Burma. Now I am in two place at once! I can finally take that off my bucket list. At this point it is only my friend Ron and I because we have left Noong and the others behind. The road to get to the actual border was a TERRIBLE rough,seldom used dirt road and my butt was sore after that ride! It wasn't on a sheer mountain face where if I fell off I would die but, the road itself was seldom used and really really terrible, one of the worst I have been on and we were on that road for about 6 K's!

We get to the guard station and the guards are so excited to see us, I seriously doubt they get many visitors haha. They yell out, "HELLLLOOOOO" and chatter away to Ron and I in their semi good English (well it was better than our Thai haha). They invite us in for coffee because it was starting to rain. They had really good coffee! Now to be honest with you, I have never had a particularly good experience at the many borders in the many countries I have been too. But, nor have I had a particularly terrible experience either. I have had to pay "administration fees" aka bribes, I have been searched and questioned but never REALLY harassed before. So, I would say thus far I have gotten off pretty easily. Had more issues getting into/out of America than I have anywhere else! So it was really nice to see some really pleasant border guards who were just happy to see us and have a chat.

I heard them chattering on in Thai then one of them pointed at me and said "Brad Pitt Superstar!" haha I had to laugh. This is so funny because I knew he thought I looked like Brad Pitt! This might come as a surprise to some of my readers, even I don't think I look all that much like him but, people from around the world, men and women in tons of different countries have said I do! So we all got a good laugh out of that haha. I just cannot seem to escape that comparison (not that its a bad thing lol). Even when I am unshaven and looking rough like today I still get it.

After our jaunt at the border Ron and I drove back to meet everyone who stayed behind and then we went for a huge lunch feast! It was really good and fun to do something new and exciting and see friends and get a good meal. Tonight I will have another good meal because we are having a farewell dinner for Matt a teacher friend of mine who is leaving tomorrow. So it has been a big day for me. I am also learning how to play Boules or as they call it here, Patong. Lawn balls whatever you want to call it. Noong was the champion last year so I have a good person to teach me how :)

Well that's all I got for now. Hope yall have a good weekend,Tyler
Posted by Unknown at Saturday, February 18, 2012