As most of you know by now I am dating a wonderful,caring,sweet and beautiful Colombian girl named Viviana. I have told you in bits and pieces about our relationship but I think now it is time to give you all the "full story" she is a very important part of my life and I want to share my happiness with yall. For a very brief period of time when I first arrived to Colombia I was dating another Colombian girl but that relationship did not last long at all, we were just not a good fit. After my break up I was obviously pretty depressed about things. My friend suggested that I check out a Colombian online dating service that matches white guys with Colombian women. 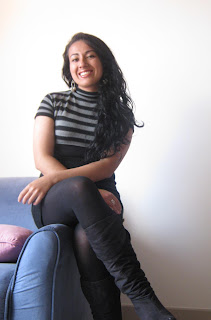 I was pretty skeptical about the whole thing figuring it was just a scam for money or just girls looking for citizenship to America. My friend had success with this website though. He went on many successful dates, although he is in "traveling mode" and not living in Colombia long term like me. After a lot of thought I decided to give Latin Cupid a shot. Click here I sent out messages to different girls but never really got anywhere to speak of with it. Then I noticed Viviana's picture. I immediately was immensely attracted to her and wanted to get to know her. I sent her a message in Spanish (using Google translate) because at the time my Spanish was horrible.

We arranged to meet up at a local shopping mall for coffee and I was so nervous because it said in her profile that she did not speak any English and she was a single mother of a seven year old! I thought to myself at first that this could never work it would be too hard. As soon as I met her though I changed my mind though. Even though my Spanish was terrible conversation flowed easily and I loved her smile and her personality. She was upfront and honest with me and told me that she was not looking for something casual because of her son Juan. Since she was a mother I couldn't just float in and out of their lives. I had to commit. So I had to think seriously about this but I decided even though we did not speak the same language, our cultures were different and she was a single mom, that I was going to give this a shot! I am so glad I did!

She has had it rough relationship wise with guys not even wanting to give her a chance because she is a single mom and things have not been easy for her but I decided I wanted to be different. It was a big new challenge for me taking on a new girlfriend and a child as well. There was a few bumps in the road especially at first in our relationship but the more time I spent with her the more I realised that I really did want to be with her and none of the things I thought would be "big issues" such as the language barrier really were big issues at all.

As time has gone on my Spanish has improved very much! I am by no means fluent but I know MUCH more now than I did six months ago because she does not speak any English. She is very patient with my language screw ups and all my questions and she is a great guesser about what I want to say even if I don't say it correctly or I have to awkwardly describe what I want to say. She is a great teacher without me ever taking a single Spanish lesson (yet)  We do have cultural differences because Latin culture is much different than American culture. We do have miscommunications with the language barrier sometimes (less than you would imagine though) and we have misunderstandings with the different cultures. I am slowly learning how to do things the "Colombian Way" and this has caused us a few fights. We are a normal couple we do fight now and again.

The difference between this and most of my previous relationships is that Viviana and I are always will to talk honestly and openly and discuss our issues and work it out. We may get angry at each other or misunderstand each other but we do not stay angry. She accepts me for whole I am. For all of my imperfections and issues and I do the exact same for her. She is always by my side to support me or help me out with anything I need. I always try to do the same for her. She has been my nurse, my friend, my translator (Yes she translate other people's Spanish into "our" Spanish because I seem to understand her better than anyone else) and my girlfriend.

I was really nervous at first about how I would get along with her family especially with the language barrier but on our very first date she invited to a birthday party of a mutual friend and her whole family was there! I got to meet everyone right away and everyone was so nice to me. Putting up with my terrible Spanish and understanding that I am a total gringo. They made me feel relaxed and at home. She has a large extended family with quite a few people living in her house with her.  But I like each and every one of them. As time has passed I have only gotten even closer to her family and like them all very much. I am very happy to know that her son Juan and I seem to get along great. It has been very important to me to be a positive influence in his life and he is your average seven year old He is a good kid and I like him a lot. He is a good friend of mine and I enjoy spending time with him and playing games like Wii and Jenga. 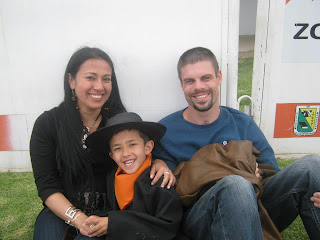 Viviana and I have been dating long enough now that the "rose colored glasses" are off. We know just about everything about each other and we realize that we are not perfect. We both have our issues and we accept that about each other and don't let it cause too many problems. She hates that I crack my knuckles. I hate that she chews on her fingernails. We annoy each other sometimes but still we stay together.

Te Amo Para Siempre Vivi. (For you English Speakers that is I love you in Spanish). Vivi is a great person, a wonderful mother and the best girlfriend I could ask for. In the past I have tended to jump into relationships head first so to speak but this time is different. It is the real deal and our feelings are totally mutual.  It has been great so far and I can't wait to see what's next. -Tyler

Just a little "P.S." for all your skeptics out there. Online relationships do not work all the time but we are living proof that they can and do work! :) Also, a big huge thank you to my friend Mark who convinced me to go to the website in the first place, and to my family and friends for the support. 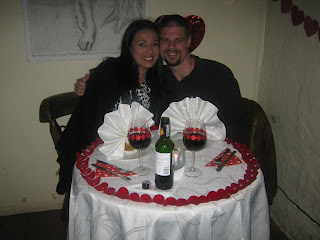