Recently I went to Sutamarchan, Colombia in the Department (state) of Boyaca. It was about four hours north of Bogota and I went there with my friends for the annual Tomatina Festival it was a wild time! There was people of all ages throwing tomatoes at each other and it was like a war zone! I covered from head to toe in tomatoes. I even had tomatoes in my ears! There was an enormous amount of tomatoes and people were having a lot of fun. Almost everyone was nice and friendly about it but, there was a few people who were really mean and they would throw whole tomatoes at you (you were supposed to crush them first) and those hurt! I did get a few bruises on my back. 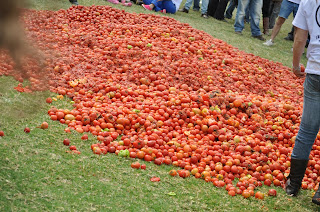 The rule was if you wanted to participate you just ran into the war zone. If you didn't you stayed out. But, many people got pelted anyway and some even got forcefully pulled in by their friends! The ninos y ninas (children) had their tomato fight first then it was the adult's turn. All my life I have wanted to go to the huge tomato fight in http://en.wikipedia.org/wiki/Tomatina  Spain. So this is as close as I will get for a while. 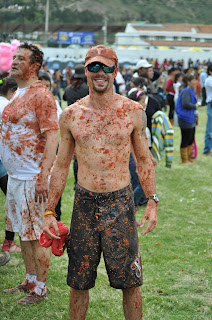 I had a really good time being immersed in Colombian culture and hanging out with my friends. We had a good weekend tour of Sutamarchan and stayed at a town near by called Villa_de_Leyva. A fun time had by all! 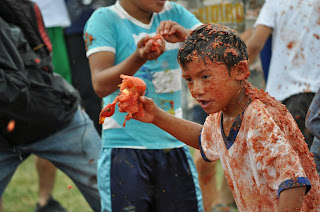